9 replies to this topic 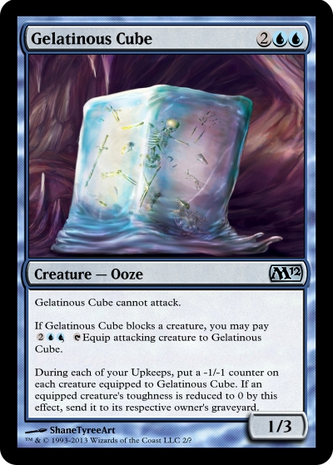 Whenever a creature is blocked by ~, you may pay {2}{U}{U}. If you do, it becomes an Aura enchantment with enchant creature and loses all other abilities. Attach it to ~.

At the beginning of your upkeep, put a -1/-1 counter on each Aura enchantment that's also a creature enchanting ~.

The card maker needs that .docx default spacing sorta deal... and cards should be able to be saved into a set.

This sounds like YGO speak. Attempted fix below. (I don't know if this is a good in-color effect, anyways.)

Whenever a creature is blocked by ~, you may pay {2}{U}{U}. If you do, it becomes an Aura enchantment with enchant creature and loses all other abilities. Attach it to ~.

At the beginning of your upkeep, put a -1/-1 counter on each Aura enchantment that's also a creature enchanting ~.

Ah, of course. How could I forget about Defender? :/

Thanks for the fix.

Great concept. This is a fantasy staple that I think Magic should have already done, but I imagine that because of the gelatinous cube's strong D&D association, they don't want to cross brands, as Mark Rosewater has touched upon before someplace. Not sure on the execution though. I like that you're trying to have the person-trapped-inside feel, but I think it would read much better and probably play better if it was worded something like this:

Whenever ~ blocks a creature, at end of combat, exile that creature absorbed by ~.

Then you may also have to say something about what happens, if anything, to the absorbed creatures when the cube dies. I mean, you do want the creatures to be able to escape, I'm assuming, from the -1/-1 counters thing. Possibly re-enter with a -1/-1 counter?

Anyway, I think this version just seems more simple and elegant, because you don't need to deal with all that clunky text about turning things into enchant creatures and losing abilities. If they're exiled, they can't do anything anyway.

You should also add 'this taps the creature it it's untapped and creature does not untap during upkeep.'

Ahhhh i love this card

This card would be kind of hard to fit with MtG rules, since after being turned into an Aura the creature is no longer a creature and therefore cannot get -1/-1 counters or lose P/T from -1/-1 counters (I think). Also you should state that if Gelatinous Cube leaves the battlefield, the creatures turn back into their original types.

1) As Theros showed us with its Bestow creatures, it IS possible to create Enchantment-Creatures and even use them as auras.

2) Counters of any kind are not limited to a specific card type: Take a look at Llanowar Reborn. It has the keyworded ability Graft, allowing it to enter the battlefield with a +1/+1 Counter, before putting it onto a creature

But it still seems a little bit ungraceful; What about abusing the Soulbound-mechanic? Instead of turning it into an enchantment, you can just Pair it with another creature, whenever it blocks a creature.

AFAIK Bestow creatures are only Aura Enchantments, not creatures, while enchanted to a creature. But orz okay then so I guess the -1/-1 counters can stick after all, but the phrase for sending it to graveyard when the number of -1/-1 counters is equal to toughness needs to be re-added then.

I think Soulbound can only apply to 1 creature, and he's going for as many creatures as you can use it to block. Soulbound is mostly used for mutual effects as well, not one-way effects.

My point was that you have the liberty to be more creative with the placement of counters; For example Creatures that enter the battlefield with charge-counters they can put onto other permanents, Lands that stack loyalty counters to put them onto planeswalkers etc.

Btw the choice of "abusing" the soulbound mechanic meant exactly that; You have to make a special binding-mechanic for something like this effect.

But I don't really get this card anyway. I guess if Wizards themselves designed a card like this it would go for something like "Whenever GC blocks a creature, you may pay {whatever} and exile that creature. When GC leaves the battlefield, put all creatures exiled by it onto the battlefield under their owner's control".